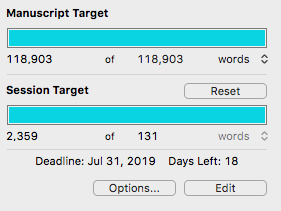 It’s not the first time I’ve ever finished a draft, but it’s the first for a book of this length and it’s truly a completed draft–no boilerplate text for skipped sections.

Once I made it to the penultimate battle, the rest of the book flowed pretty well. You can see I clocked in a few days of high word counts.

I’d had the ending figured out for quite some time, so it was nice to finally get to that part and find that the major aspects of it didn’t need to change.

Some highlights since the last update:

Book 2 is mostly set in a world with clothing magic, a history of magical girls, and a big train. My gut is telling me it’s gonna be a heist since the characters have to recover an object the MC absolutely needs that went missing after a (mostly) natural event destroyed its hiding place.

But my next WIP will be a contemporary that’s much shorter than this book. Technically, it’ll be my second draft of the story, but I changed the entire setup so it’ll basically be a first draft again. The story takes place at a college during Holy Week and is in many ways an allegory of the gospels, but not quite (and also very queer).

My plan right now is to begin drafting that book, then incorporate some days of editing FDAD Book 1. These books are different enough to where I’m not concerned about getting exhausted or ideas from one bleeding into the other. My goal is to get FDAD Book 1 polished enough to query, which will only happen after this editing round, a beta reader round, and another self-editing round at the very least. In other words, I really don’t plan on starting book 2 unless/until I sell book 1. I’ll probably summarize book 2 in broad terms and do some planning, but no drafting.

That’s it for this update. Next time, I’ll say a little bit more about my new WIP.

Author of two erasure poetry collections, Forgive Us Our Trespasses and Lest I Know Your Weakness. Fantasy writer. Educational content editor by day. View all posts by Taylor Ramage

One thought on “FDAD: A Multi-World Fantasy WIP Update #4 Finished!”

This site uses Akismet to reduce spam. Learn how your comment data is processed.

Author of poetry and fantasy. Lover of stories in all forms.

Or, How I Finally Stopped Putting Off My Dreams of Writing and Illustrating a Children's Book

Analysis of music, movies, Japanese cartoons and a few more of my favorite things.

A repository of coffee, tea and alcohol news, resources and guides

Freaking Out and Geeking Out

A Blog about Watching Anime with Jesus

the space for all women & nonbinary gamers

Our church's study through Haibane Renmei

Photography, Fashion and Fandoms for the Fabulous Fanatics

tell your stories, love your life

An iPhone Pastor for a Typewriter Church

Investigating questions of importance for the UCC...through research and statistics

One Guy's Thoughts on a Variety of Anime and Manga

An Anime Blog by a Baka Living in Japan

The Place Where A Southern Boy Talks About Those Funny Japanese Cartoons!

Ingram Ink
Blessed are the Meek

Happy to be here

A Medievalist's Perspective on Anime and Religion

An ongoing exploration of faith, culture, myth, life, art. An advocate for all who are trapped in nightmares.

I have no voice, yet I must flame.

a radical approach to theology and politics

Author of the DRAGON RISING series

Reviews and Opinions about books, food, and everything else in between

"There is a thin line that separates laughter and pain, comedy and tragedy, humor and hurt."~ Erma Bombeck

Smile! You’re at the best WordPress.com site ever

savoring the wisdom of the world's religions